Our first race of the season race was an exercise in light air sailing. It was held in very light easterly winds in the range of 1-4 knots and nearly flat water. The course, Course 3, was shortened to end at the second mark, Mark 2, for a total distance of 1.925 nm. This was a good call by the RC as we finished less than 10 minutes before 9:00 PM, the mandatory time limit.

Our elapsed time was 1:40:22 good for 9th place out of 15 starters in the Spin 1 division.   We made the first mark in three tacks (starboard-port-starboard) clearing the mark by inches.  In these conditions it was important to keep the boat moving with the sails loose, crew to leeward, and not heading too high. Boat speed, typically 0.5 up to 2 knots but sometimes 0.00 on the readout, was a good indicator of optimum course.

The crew did a good job of keeping the No. 1 and main trimmed to best effect.  After rounding Mark 3 we got the spinnaker, an old “reacher” spinnaker and the only one on board, up without incident.  Again, it was a matter of keeping the boat moving by heading up (away from the mark) enough to keep the spinnaker filled.

Although the course was about 45o from directly downwind we still had to jibe over to port, as did most of the asym boats, to make the finish line in the darkening, chilly evening. 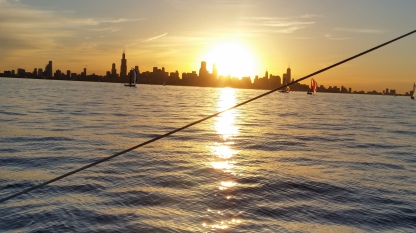 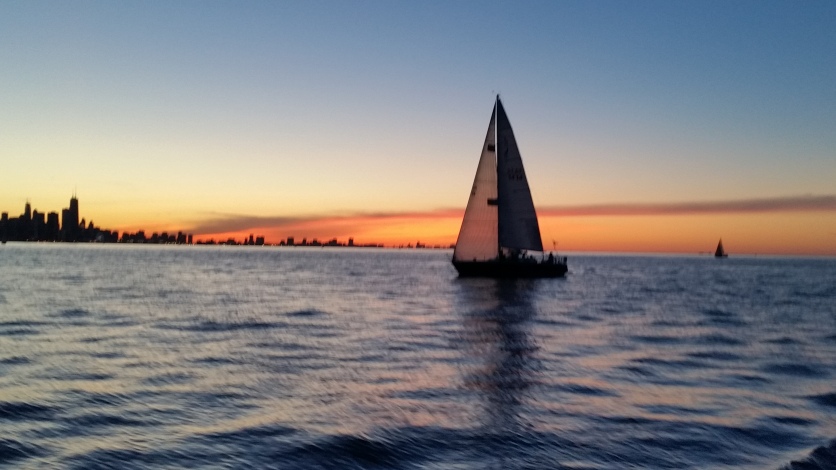 Share this: j120 Sailing and Racing Chicago on Mazal Tov

2017 Purple Line Chicago – We were the committee boat for this one and we still raced!